THE PEOPLE POWER REVOLUTION IN THE PHILIPPINES: I SAW NO ONE YIELD TO FEAR

Ferdinand Marcos became the tenth President of the Philippines in 1965. While enacting a number of public works projects and bolstering the Philippines' military during his two constitutionally-mandated terms, Marcos used his time in office to establish a dictatorial regime characterized by a personality cult, the suppression of nonviolent student movements, the framing of politicians in a regime-sponsored bombing, and a martial law declaration in 1972 that led to the jailing of the political opposition leaders.

Popular criticism from opposition leader Benigno "Ninoy" Aquino had been frequent throughout Marcos' political career and represented a threat to the sustainability of his regime. Therefore, in 1971, during a Liberal Party rally, Aquino was unjustly accused of orchestrating a bombing in Plaza Miranda, an attack that had actually been planned by Marcos' henchmen. The bombing was later claimed to be the beginning of a communist insurgency, which led Marcos to declare martial law on September 21, 1972.

Two days after Marcos' announcement, Aquino was imprisoned on charges of murder, illegal possession of firearms, and subversion for his "role" in the Plaza Miranda bombing. Jailed for almost three years before the start of his trial, Aquino launched a hunger strike to protest the injustice of being tried in a military court in April 1975, which left him almost 20 kilograms skinnier after 40 days without food. On November 25, 1977, a military commission found Aquino guilty of all charges, sentencing him to be executed; however, the execution was never carried out, and he languished in jail for eight more years. After suffering two severe heart attacks in 1980, Aquino and his family were allowed to go to the US to seek treatment, where after receiving coronary bypass surgery, he stayed for nearly three years to work on two books and give countless speeches denouncing the Marcos regime.

After hearing rumors that Marcos was deathly ill, Aquino returned to the Philippines in 1983 with ambitions of reviving the Filipino opposition. As he disembarked the plane, Aquino was shot and killed by Marcos' henchmen, a move that only intensified the call for democracy. According to Aquino's wife Cory, "The nation was awakened by that deafening shot." Over two million people attended Ninoy Aquino's funeral, showing the Marcos regime that Aquino's vision of a free and democratic Philippines would survive even in his absence. [1] 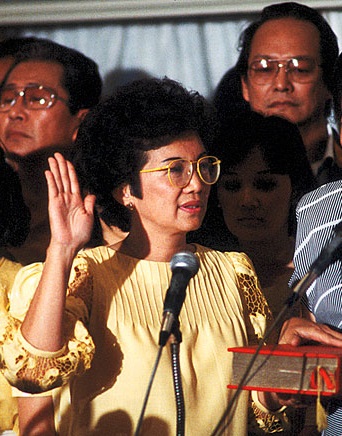 The public outrage that mounted after Aquino's assassination built the foundations of the Filipino popular democratic movement. The government's investigation into the assassination left the truth hidden, spurring significant political unrest. Through public protests throughout Manila, led by Aquino's wife Cory, Aquino's followers demanded the truth.

In order for Cory Aquino to mobilize a popular democratic movement, she needed Radio Veritas, a 24-hour AM radio station operated by the Roman Catholic Church, because it served as the primary communication platform for the democratic opposition. With all other non-government media shut down, Aquino and her cadres used Radio Veritas to inform Filipinos of political developments and organize them for nonviolent protests. After Ninoy Aquino was assassinated, Marcos prevented local media from broadcasting news of his death, and Radio Veritas, the only station in the Philippines to carry news of Senator Aquino's assassination, galvanized the two million supporters to come to his funeral.[2] According to former President of the University of the Philippines Francisco Nemenzo, "Without Radio Veritas it would have been difficult, if not impossible, to mobilize millions of people in a matter of hours." [3]

With public outrage at an all-time high, Marcos held a snap election on February 7, 1986, to prove to the international community that he had the backing of the Filipino populace. Representing the opposition was Cory Aquino, who, despite trying to keep out of the political arena, ultimately chose to run in the election. After a grossly fraudulent election that declared Marcos the winner, the opposition shifted gears and launched a multi-faceted nonviolent resistance movement, which included divestment campaigns from Marcos-owned businesses as well as a mass mobilization effort at Epifanio de los Santos Avenida, the main square in the Filipino capital.

Following the legacy of her husband, Cory Aquino became a leader of the pro-democracy movement in the Philippines. Her husband had once declared that "the great ‘legitimizer' of government is the ballot, not the bullet," and as such, Cory continued her husband's legacy of nonviolent resistance for accountable government.[4] Called the "Saint of Democracy" by Time Magazine, Cory Aquino inspired the Filipino people to protest injustice peacefully and powerfully as no one had in the history of the country, and her success inspired nonviolent revolutions across Asia and the rest of the world. According to Anwar Ibrahim, the Malaysian opposition leader, "Cory Aquino's struggle for and success at fortifying constitutional democracy in the Philippines was one of the signal battles in the last quarter of the 20th century", and Archbishop Desmond Tutu often cited Aquino's commitment to democracy as an inspiration in transforming South Africa's political landscape.[5]

Reflecting on her role in the Philippines' transition to democracy, Cory Aquino explained, "I don't have any formula for ousting a dictator or building a democracy. All I can suggest is to forget about yourself and just think of your people. It's always the people who make things happen."[6]

The Marcos administration functioned with disregard for Filipinos' civil liberties and political liberties, interested only in its own survival. Journalism was highly censored, with all television and radio other than Radio Veritas run by the regime. Marcos personally taxed every business transaction that took place, opting to nationalize the entire Philippine gambling industry in order to ensure that he had a steady stream of cash available for bribes.[7]

Amnesty International reported that between 1972 and 1977, over 60,000 political arrests were made on Marcos' orders, and that torture was common practice.[8] The judiciary was neither independent nor just, and even after it was revealed that General Fabian Ver and several other military officers planned and executed the assassination of Ninoy Aquino, Marcos chose not to prosecute Ver because of his power and influence among Filipino military leaders.

Cory Aquino announced, "I'm not asking for violent revolution. This is not the time for that….now is the way of nonviolent struggle for justice. This means active resistance of evil by peaceful means."[9] Aquino, using Radio Veritas and other independent news sources out of Marcos' reach, encouraged Filipinos to boycott businesses with ties to the Marcos regime, which included a number of Philippine banks, media corporations, and multi-national companies such as Coca-Cola.[10]

On February 15, 1986, in protest of Marcos' announcement that he had won the presidential election, Aquino held her own swearing-in ceremony to take an oath of office, which gained significant mass support. A week later, a significant number of leaders within the Filipino military withdrew their support for the Marcos government, leading to an announcement over Radio Veritas calling on the Filipino people to gather in Manila's main square, Epifanio de los Santos Avenida, in support of the military resignations on February 22.

Over the next three days, from February 23-26, the pro-democracy movement led a culminating rally of historic proportions along Epifanio de los Santos Avenue with two million Filipinos. With such a significant public display of support, more members of the political and military apparatuses joined the opposition. According to former Philippine Defense Minister Juan Ponce Enrile, "It was funny…We in the defense and military organizations who should be protecting the people were being protected by them."[11] The mass mobilization efforts forced Marcos to order the army not to use force against protesters, setting the stage for a transition to democracy.[12] 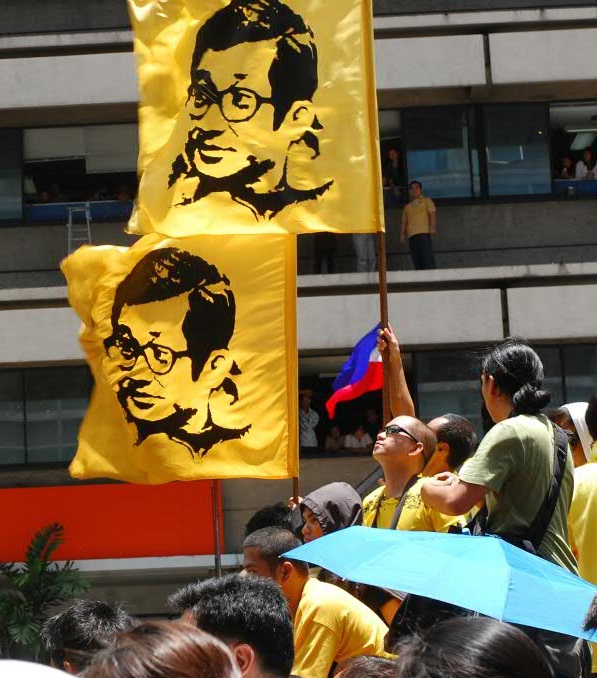 Due to Marcos' media crackdown during the period of martial law, the international community had limited access to news from the Philippines. Only during the 1986 election between Cory Aquino and Marcos did the world have the opportunity to see the full extent of corruption and the resistance of the Filipino people. In an effort to legitimize his mandate from the people, Marcos allowed the National Citizens' Movement for Free Elections (NAMFREL), a domestically-based election monitoring institution, to dispatch volunteers to polling places to monitor the elections.

This ushered in democracy rather than regime survival, however, as the NAMFREL volunteers documented widespread voter intimidation as well as election fraud, and publicized it accordingly to both domestic and international authorities.[13] International coverage of election fraud and the subsequent people's democracy movement led to global solidarity for the democracy movement, forcing Marcos to cede power and leave the country. Cory Aquino was democratically elected and sworn in as president of the Philippines on February 25, 1986, heralding a new era of democratic politics in the Philippines.

The People Power Revolution in the Philippines (Bilingual)

The People Power Revolution in the Philippines

Through the Eye of the Needle: Frances Perkins and the Seamstresses’ Rebellion

If you do not have access to Google Play download the Android APK file below ( Android 4.2.2 and higher).